Thursday 30th August to Sunday 2nd September - get set for the UK's biggest air festival, 4-days of action and entertainment in the air, on land and at sea! Award-winning and internationally renowned, the Bournemouth Air Festival has entertained more than 9.2 million people for the past 10 years. 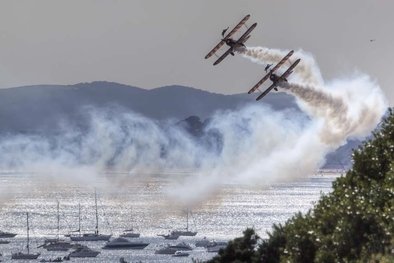 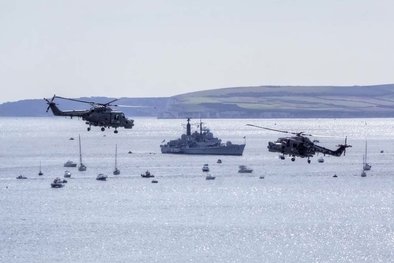 Setting Bournemouth aside from other air shows, when the sun goes down, Night Air entertainment will light up the skies of the Bournemouth beach’s with pyrotechnic night flying, street entertainment, awesome live music and military performances. A free to attend event, the Bournemouth Air Festival is so much more than an air show!
On Friday 31st August see the skies light up with firworks at Bournemouth Pier.

The best views be it on land, sea or in the air is from the beach.

This years amazing aircraft will include, for the first time the Breitling Jet Team, the RAF Red Arrows, Gravity Industries Jet Suit Display Team displaying for the first time, RAF HC2 Chinook, Super Pitts Muscle Plane a daredevil routine performed in a Muscle Biplane Pitts S2S G-EWIZ, Tigers Parachute Display Team, Team Raven, Battle of Britain Memorial Flights (BBMF) by the Spitfire, Hurricane and Dakota, the Aerosuperbatics Wingwalkers, the Blades, Sally B – B17, Strikemaster Pair, Vampire Pair, Twister Duo and the Bremont Great War Display Team.
On the land, as always, there will be plenty of action and entertainment, from funfairs, demonstrations and food and drink to the brilliant Royal Navy, Royal Air Force and Army villages together with ‘meet the display team’ opportunities.

At sea there will be a Royal Navy Ship anchored, anchorage tours around the bay will be on offer.

All this action will be taking place between Bournemouth Pier and Boscombe Pier.  The best way to get there from Riverside Park is either on foot or by bike.  Alternatively there are 2 Park and Ride’s, Kings Park postcode BH7 7AF or Redhill Park postcode BH9 2SW. If you are driving to the town center car parks make sure you check out the road closures that will be in place.

Get In Touch With Us

Please get in touch with us, with any queries or questions you may have. To make a booking you can give us a call, email us or use our online booking tool below.

Our offices are open 9am to 5pm Monday to Saturday.

The hot weather has finally arrived, we are currently experiencing temperatures in the high 20’s. Next week could even hit the low 30’s. I have given up watering the lawn, as much as I try to make it look healthy and green each day it just seems to get browner. With no rain forecast and the potential hose pipe ban I’m leaving it. Knowing that it will come back and look fabulous once again.

It is now mid-May, where has that time gone. We have had some beautiful weather during April and May, apart from today as I write this blog it is pouring down. I am sure the garden, plants and lovey baskets, I have just bought are thankful for.

We did it, all the work is complete and each of the houses are looking bright, welcoming, and fresh. The outside area is coming on too, just in time to reopen our doors and welcome you to Riverside Park from Friday 25th March2022.